Languages Common, Gnoll. Additional languages equal to your Intelligence modifier (if it’s positive). Choose from Dwarven, Gnomish, Orcish, Tengu, and any other languages to which you have access (such as the languages prevalent in your region).

Note* When selecting a versatile heritage, gnolls do not gain an additional ability boost or ability flaw. 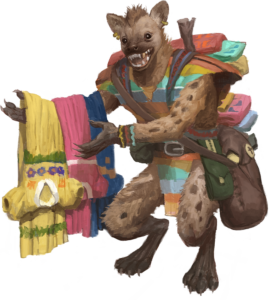 When the gnolls’ homeland was still young, would-be settlers hired the indigenous people to guard them from the desert’s myriad predators. During a return trip from one of these caravans, a band of gnolls stopped to tend their bulette and wyvern companions at a previously undocumented oasis. It was there they encountered a family of gnomes with no way back to society. Recognizing this, the gnolls helped the family.

As thanks for saving them, the matriach of the gnomes gifted the gnolls with the ability to see in more than just shades of blue and green. The world around them exploded with color in a million shades and hues.

The gnolls quickly found great appreciation for their adapted sense of sight. They began accepting multi-colored blankets and dyed cloth in trade for their services, and their families became some of the chief purveyors of trained wyverns for local racing circuits when it became a pastime for the residents of their region.

Gnolls on Theia appear as humanoid jackals, hyenas, and pharaoh hounds. Those native to the country of Borboto dress in sophisticated colors, while their more feral cousins in Wutente prefer tans and grays that aid them while hiding in and around dunes.

Gnolls reach adulthood by 15 years of age, and they can live between 71 and 110 years. Most gnolls stand anywhere from 5-foot, 8 inches to almost 7-feet tall, with the females usually being slightly larger than the males in both height and build.

Gnolls are not known to keep their own society, prefering small packs and families, either as hunters or when protecting caravans. The closest structure the race has to leadership comes when one must make decisions. If a fight breaks out, the rest of the pack does things the winner’s way, while those opposed are either killed or shunned.

Borbotos gnolls lean toward good, although they can be a challenge to work with when there’s a misunderstanding. The feral gnolls in Wutente are, in contrast, usually chaotic neutral, with some having grown increasingly evil over time. Gnolls that practice religion often worship Brutus Peregrine, Theia’s god of travel and luck, or Blazoke, the Passionate Devastation.

Gnolls often have a name by which their family refers to them and another representing who they become as they mature. It is this name that many gnolls present to the world. Family Names tend to describe either a task the family is known to do well, or a physical distinction between them and other gnolls.

Exiled, Wutenten gnolls and those without family will adopt a pack and adventure with it. Borbotos gnolls are natural barbarians, clerics, rangers, and zealots.

Many gnoll families treat their family’s culture as their heritage, which may or may not play into an individual gnoll’s choices as they mature. Choose one of the following gnoll heritages at 1st level.

You are especially good at riding traditional gnoll mounts. You gain an ability boost to Wisdom, an ability flaw to Intelligence, and the Ride feat, even if you don’t meet the prerequisites.

Trade routes in Eastern Theia are largely populated by caravans run by gnoll families. Your own travels between countries and out into other parts of Theia regularly.

You gain an ability boost to Constitution and an ability flaw to Charisma. You gain the Pick Up the Pace general feat, even if you don’t meet the prerequisites.

You have spent enough of your life in the dunes of Wutente to grow used to the arid environment. You gain an ability boost to Constitution, and and ability flaw to Wisdom. You also have fire resistance equal to half your level (minimum 1), and you treat environmental heat effects as if they were one step less extreme (incredible heat becomes extreme, extreme heat becomes severe, and so on).

Your family sells wares across Theia, which has given you a predilection for learning languages quickly.

You gain an ability boost to Charisma, an ability flaw to Dexterity, and two additional languages of your choice, chosen from among the common and uncommon languages available to you, and every time you take the Multilingual feat, you gain another new language.

A small, but growing population of gnolls bring their love of colors and growth to people and plants.

You gain an ability boost to Wisdom, and an ability flaw to Dexterity. You can communicate with plants on a basic level and use Nature—in place of Diplomacy—to Make an Impression on them and to make very simple Requests of them. Non-creature plants typically can’t fulfill most requests you might ask of them unless you have access to magic such as speak with plants. Beginning at 5th level, you gain the Green Empathy druid feat, which grants you a +2 circumstance bonus on your checks to Make a Request of a plant.

Murals depict spirewalkers as the elite gnoll warriors who guarded the cabaro when they ruled Borboto. While that time is long past, the gnolls still live in those areas of the country and teach their offspring how to survive there as well.

You gain an ability boost to Dexterity, an ability flaw to Intelligence, and you can ignore difficult terrain caused by rubble and uneven ground made of stone and earth.

In addition, when you use the Acrobatics skill to Balance on narrow surfaces or uneven ground made of stone or earth, you aren’t flat-footed, and when you roll a success at one of these Acrobatics checks, you get a critical success instead.

Aardgnolls make due in Theia’s jungle environment. Natural selection has ensured the smaller gnolls survive in a region of dinosaurs and other large threats.

You gain 6 Hit Points from your ancestry instead of 8. You are Small, and your Speed is 25 feet. You gain an ability boost to Dexterity, and an ability flaw to Intelligence. You are trained in Stealth and Survival, and you can use creatures that are at least one size larger than you (usually Medium or larger) as cover for the Hide and Sneak actions, though you still can’t use such creatures as cover for other uses, such as the Take Cover action.

At 1st level, you gain one ancestry feat, and you gain an additional ancestry feat every 4 levels thereafter (at 5th, 9th, 13th, and 17th levels). As a Theian gnoll, you select from among the following ancestry feats. Additional feats are available in Lands of Theia for the Pathfinder Roleplaying Game 2nd Edition.

Theian gnolls are a social, if nomadic culture who thrive in their homeland. You gain the trained proficiency rank in Nature and Society. If you would automatically become trained in one of those skills (from your background or class, for example), you instead become trained in a skill of your choice. You also become trained in Gnoll Lore.

You know how to use weapons appropriate for life on the move through regions with aerial predators and creatures hiding in dunes. You are trained with halberds, longbows, composite longbows, sandthumpers, shortbows, and composite shortbows.

Special This feat counts as Gnoll Weapon Familiarity when meeting the prerequisites of Gnoll Weapon Practicality and Gnoll Weapon Expertise. The benefits of those feats apply to the weapons listed here..

You grew up a nomad amongst nomads. Your family shuffled from one pursuit to the next, always trying to learn something new. Choose a gnoll heritage you don’t already have. You are a member of that heritage, and gain the benefits of that heritage unrelated to your ancestry traits (such as ability boosts or flaws).

Requirement You are wielding a melee weapon.

Extending your body to its limits, you attack an enemy that would normally be beyond your reach. Make a Strike with a melee weapon, increasing your reach by 5 feet for that Strike. If the weapon has the disarm, shove, or trip trait, you can use the corresponding action instead of a Strike.

Prerequisites caravan driver gnoll heritage or Pick up the Pace

You know how to get the most effort out of your allies on the road. When Hustling in a group during exploration mode, your group can Hustle for as long as the member who could Hustle longest on their own, plus an additional 20 minutes beyond that.

You are one of the most prominent people in your profession. When you Earn Income, you gain twice as much income from a failed check to Earn Income. Due to your heightened popularity, you’re more likely to find more lucrative jobs when trying to Earn Income.

If you are legendary in a skill you would use to Earn Income, you attract higher-level clients than your location would allow, as clients actively seek you out. For instance, other nobles, mastersmiths, or inventors might travel to the hamlet where you are staying between adventures to hire you. Typically, this increases the clients available by 2 levels or more, determined by the GM.

Like every gnoll that wishes to eventually run a mercantile operation, you are capable of recognizing blatant attempts to cheat you. You can cast 4th-level discern lies as a primal innate spell once per hour.

Your understanding of the necessities of safe travel have reached their peak. You can cast 7th-level unfettered pack as a primal innate spell once per day. If you are also a member of a spellcasting class, you can add that spell to your repertoire or spellbook, or otherwise learn or prepare it as a spell of your spellcasting tradition that you can heighten freely.